I was paddling the lazy Housatonic with an experienced naturalist in the stern. I looked back over my shoulder. He grinned at me.

“We have a joke about that, Tad,” he said. “If anyone has to ask, tell them it’s a hawk. They’ll never know, and hawks are so much more appealing.”

He glanced at the sky. “Vulture.”

So how did he know?

Here are a couple of layman’s tips:

The end of a hawk’s wings look rounded and smooth (below, left). A vulture has finger-like feathers at its wing tips (below, right). 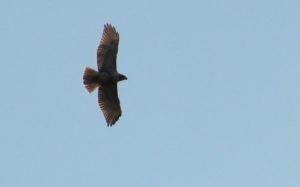 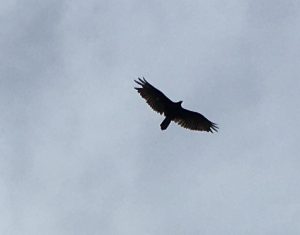 Slightly more subtly, look at the flying pattern. Vultures tend to soar in circles, flapping their wings only occasionally. Hawks soar too, but with a choppier, more frequent flapping pattern.

As a birdwatcher from North Carolina going by the handle of “nurse_turtle” says:

Putting aside our waggish naturalist’s jokes, going on a guided bird walk is fun, and beginners are welcome. The Hoffman Bird Club leads frequent field trips (https://hoffmannbirdclub.org/field-trips/), often in collaboration with Mass Audubon, The Trustees and BNRC.