I’ve learned a few things in my first four months at BNRC. I have learned the difference between a CR and an APR, and I recognize at least a few faces when I attend a Mass Land Trust Alliance meeting.  I’ve learned that progress in land conservation can often be measured in years, and success is measured in…forever. That there is no competition when it comes to protecting the land we love—we all work together.

I’ve also been discovering the nuances of Berkshire geography, by walking BNRC trails on properties from North Adams to South Egremont, and have fallen head over heels for the beauty of this extraordinary place.

A few highlights of my travels so far: 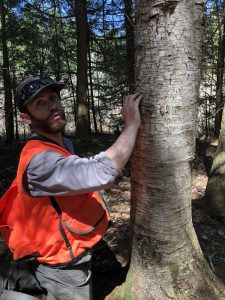 Mike Leavitt, our Trails Coordinator, gave me a tour of one of our newest trails, at Clam River. He pointed out so many interesting sights:  old foundations from long-gone houses. Rare wildflowers. Boulders and logs along the trails which might seem to have fallen there naturally to form a perfect footpath, but that he and our trail crews carefully and painstakingly moved there to create safe passage through the prettiest places.

He showed me trees that had been clawed by bears to mark their territory, and this one, which was chewed on by a bear. High in the trees, there was a bear’s “nest”—where a bear pulled branches together to create a sleeping spot for herself and her cub.

At Steadman Pond Mike introduced me to the concept of “beaver deceivers,” which keep the beavers from flooding bridges and boardwalks. I kept forgetting the name and calling them “beaver confusing devices” which doesn’t rhyme at all.

Mike takes great pride in his trail design, a skill he he has honed for years, since he first interned with the Appalachian Mountain Club.  “The trail needed to be at a slight slant to make sure water runs off without eroding the trail,” he explained to me. He also showed me how he uses natural features to encourage people to make unconscious choices about which way to go, and how it can take a week of hard work by a full crew to build ten feet of trail in a tricky area.

That day we also visited Steepletop, where I saw a barred owl, up close in a tree.  At Hollow Fields, along with the hundreds of bobolinks perched on blades of grass, I saw a pileated woodpecker making its way up a tall tree. (If you are noticing a bird theme in my observations, you’re right: my first job was at the National Audubon Society, where I helped organize their Birdathon fundraiser. I got to go birding with some of the best birders in the country, and I’ve loved birds ever since.)

Another favorite hike was to the Hoosac Range.  It was still winter and I kept stepping off the packed trail into knee-deep snow.  At Thomas and Palmer Brook I had a pair of borrowed snowshoes, and learned that it is a true cardio workout to walk in them.

On almost every walk I’ve taken, my dog Hazel has been great company.  She spends most days curled up under my desk, but comes to life when we get to go outside.

She doesn’t mind snow, she adores mud, and I can usually trust her not to run away from me. One recent day, though, she gave me a real scare: we were at Housatonic Flats in Great Barrington, where we’ve already been many times. There’s a place where you can get to a quiet spot in the river down a very easy slope, and she took her usual dip there.

A ways further up the trail we approached the water again but this time it was over a bit of a cliff.  I couldn’t stop her: she leapt into the water, which was deep and moving fast. She dunked, came up, and put her paws on the bank, but it was too steep—there was no way she’d be able to climb back up. In a flash I was flat on my stomach, reaching over to grab her paw and haul her back up.  She was soaked, I was muddy, but she was safe, and after a quick shake, apparently none the worse for wear. I, however, couldn’t get the fear of my dog being swept away down the river out of my head for the rest of the day!

Meeting YOU on the Trail

The hikes I’ve enjoyed the most are when I get to talk to hikers and volunteers, to hear what these lands mean to them.  Like Tom, who told me he’s lost 40 pounds since he retired and started hiking an hour every day. He told me he’d always wanted to spend his days in the woods but didn’t realize he could make a career of it. He’s a bit envious of our staff, who get to do just that, but he’s making up for lost time.

Or John, who spent a recent afternoon assembling 12 bluebird box kits to put up at Hollow Fields. John’s had a distinguished career as well, but his fondness for the lands of the Berkshires has led him to join our Board of Directors.

A Day with George and Tad 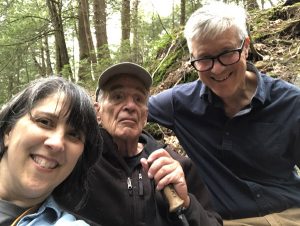 Of all the hikes and walks I’ve taken so far, the best was the day I spent with George Wislocki, BNRC’s founder and first president, and Tad Ames, his successor, whose shoes I am now attempting to fill.

We didn’t talk shop, much—George told me his idea for a one-act play to celebrate Tad and his vision for the High Road, and gave me suggestions for the best way to enjoy Mount Greylock. We walked around Stevens Glen, one of our oldest properties, across wooden bridges and up step hemlock-covered slopes. Wood thrushes sounded all around us, and Hazel found a few streams to sit in.

Unfortunately, my hikes are on hold for a few weeks while I try to rehabilitate an old Achilles tendon injury—apparently walking up hills can stretch the Achilles in painful ways.

I intend to be back in the game in time to help lead a birdwalk at Housatonic Flats on June 23.  I have a secret weapon—my husband, who knows every bird and birdsong and loves to help people discover their first redstart, tanager or even identify those noisy black birds with the white speckles (spoiler alert: they’re starlings).

I hope you’ll consider coming along! Click here for more details about the walk.