What animal has done more to shape the landscape than any other (besides humans)?

Beavers have, but they almost went extinct! 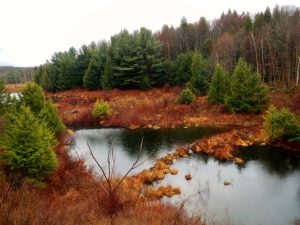 The pond at Basin Pond in Lee was once a rushing brook. It is the hard work of beavers that have created this picturesque wetland that so many animals rely on. © Bob Watroba

The fur trade took off in the northern parts of North American colonies in the late 17th century. Beaver in the Northeast had fuller coats which made them more desirable for coats and hats. By the end of the 19th century beavers were mostly eradicated from their original habitats due to extensive and unregulated hunting and trapping.

In 1928 beavers were found in West Stockbridge, which was the first sighting in the state since 1750. During the past century they have been successfully reintroduced and are now abundant in western Massachusetts. Beavers have actively shaped the landscape in New England for thousands of years.

They are considered keystone species because they create wetlands that provide habitat for countless plants, invertebrates and wildlife. These environments are also helpful in reducing flooding by restricting and slowly releasing water. In addition, the wetland habitat increases water quality by removing or transforming excess nutrients, containing silt and sediment, recharging groundwater and removing toxic chemicals.