A Lanesboro delegate to the convention in Boston weighing state ratification of the proposed new US Constitution arranged for a bonfire to be lit atop the hill if Massachusetts approved it. The state did, and the signal could be seen for miles. The moderate 60-90 minute Constitution Hill Trail lets hikers recall that historic moment. The Field Trail offers and easy walk and views of Mt. Greylock.

This land, and all of the present-day Berkshires, are the ancestral homeland of the Mohican people, who were forcefully displaced to Wisconsin by European colonization. These lands continue to be of great significance to the Stockbridge-Munsee Mohican Nation today. To learn more visit mohican.com.

ATTENTION TRAIL USERS: Timber harvesting will take place through January 2022. There will be logging machinery on the lower (west) trail and near the parking area. Equipment operators will be cautious of hikers. Please park in the designated areas. Trails will remain open, but PLEASE USE CAUTION. Contact Nicole Pyser at 413-499-0596 or nypser@bnrc.org with any questions.

From Pittsfield: Take Route 7 north into Lanesborough. Just past the Lanesborough Police Station turn left onto Bridge Street. If you pass The Old Forge you have just missed it. Follow Bridge Street to the end, past the BNRC sign, to the large parking area with a kiosk.

From Lenox/Lee: Take Route 20 north into Pittsfield. In Pittsfield, continue past the BNRC offices and hop on Route 7 (First Street, but North Street will work too). Take Route 7 north into Lanesborough. Just past the Lanesborough Police Station turn left onto Bridge Street. If you pass The Old Forge you have just missed it. Follow Bridge Street to the end, past the BNRC sign, to the large parking area with a kiosk.

The Constitution Hill Trail takes visitors past the Constitution Oak tree and a large rock outcrop. Beyond the summit, the trail turns westward past an old stonewall before bringing hikers back on what eventually becomes a woods road whose surface was once hardened by chunks of slag glass, which are still visible. Slag glass is a byproduct of iron production that was used as fill on old roads.

The Field Trail is a mowed path that parallels Bridge Street before veering downhill through the hedgerow and winding around the field. This trail has great views of Mt. Greylock.

In 1788, a Lanesboro farmer named Jonathan Smith was chosen to represent his town at the convention in Boston that would decide whether Massachusetts should ratify the proposed new US Constitution. At the convention he made a persuasive argument in favor of it as a way to prevent outbreaks of violence like Shays’ Rebellion in Western Massachusetts. The bonfire he had organized atop “Bald Headed Hill” alerted residents of Lanesboro and surrounding towns that his view had prevailed and Massachusetts had ratified the Constitution.

The hill is no longer bald, and was renamed “Constitution Hill” by Smith. The forest has long since reclaimed the landscape, though there are winter views from the ridge after leaves have fallen. A plaque marks the bonfire site, near an oak that was planted in 1921 to replace an oak that was the solitary sentinel on the hill in Smith’s day.

Near the trailhead and its two parking areas is a reclaimed orchard and the site of the home of a 19th century humorist, Josh Billings. He is now memorialized by Berkshire County’s annual Josh Billings RunAground triathlon. 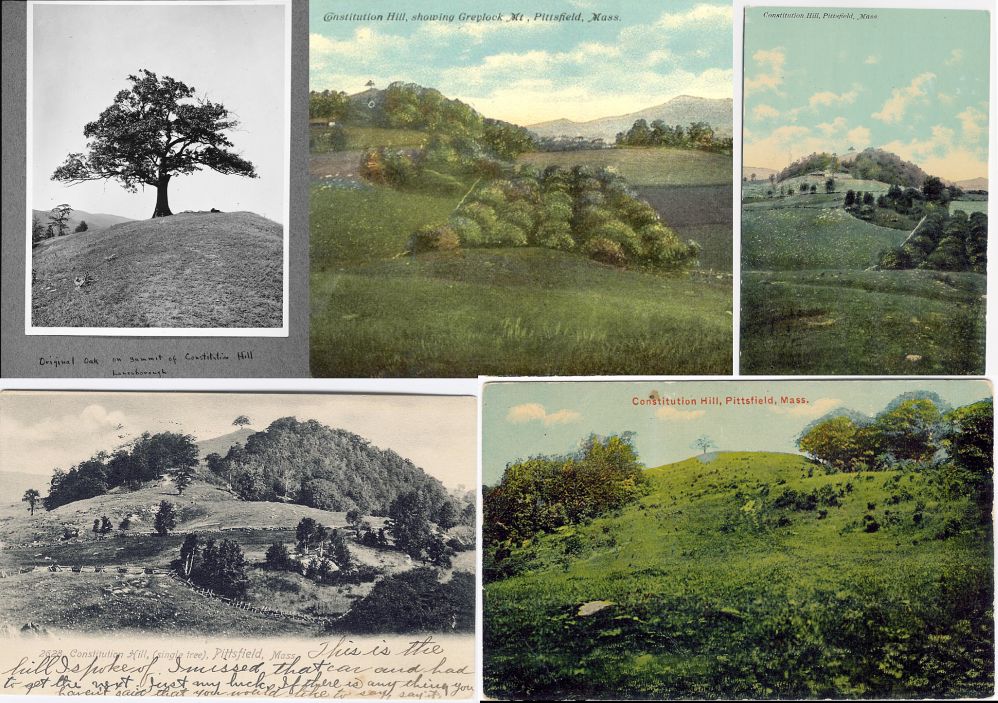 Deer are abundant on Constitution Hill, whose diverse habitats are home to white and yellow birches and other hardwoods, as well as Dutchman’s breeches. In 2006, the Berkshire Natural Resources Council, with the help of the Massachusetts Department of Fisheries and Wildlife’s Landowner Incentive Program, began reclaiming parts of the property’s abandoned orchards and fields to create conditions that various wildlife need. Forested areas will be cut to simulate natural disturbances, retaining large mature trees and standing snags for wildlife that depend on such “old growth” forested habitat characteristics.

Back to BNRC Properties